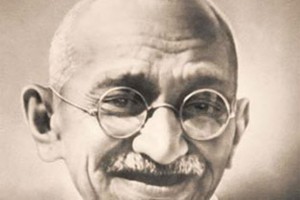 Gandhi is a revered figure in the West.  He certainly was a dynamic force in India, but what were his views on the caste system?The following selection of sayings might surprise you:

"If the lower caste people leave their ancestral professions and adopt another profession, their expectations will rise and they will lose their mental balance and ultimately their family’s peace will be destroyed." Hindi Swaraj

"A Shudra can’t be called a Brahmin even if he possesses all the qualities of a Brahmin by inheritance.  He should never claim his right other than the Varna in which he was born.  This is an evidence of his being humble." Young India (11-24-27)

"As per the Hindu Scriptures if a person adopts any other profession in place of his family profession, he commits violence and he renders himself to meanness by not following his ancestral profession." Young India (11-31-27)

"As the time goes on every day my belief in the Varna System is strengthening that  man has no existence without it.  Therefore, the Moslems and the Christians must follow this system; as it is as mandatory for them as it is necessary for the Hindus, to maintain social harmony."  Round Table Conf., l922

I call myself a Samatany Hindu who has deep faith in the caste system." Dharem Manthau, p. 6

"I believe in caste division on the basis of birth because the roots of the caste system start from birth." Verana Vayavstha, p. 77

"Caste means pre-ordained profession.  Caste suggests to a man that he should adopt the profession of his forefathers to earn his livelihood." Varam Vayastha. P. 65

"I feel that the western culture, which is the product of devils, has shattered our caste system." Dharan Manthan p. 65

"According to me, the caste system is scientific. You cannot condemn it by argument.  It controls the society socially and ethnically—I see no reason to end it.  To end casteism is to finish the Hindu Religion.  There is nothing against Varnastram.  I have reason to believe that the caste system is an arithmetic principle.  It has its own limitation and disadvantages. Even then there is nothing to be hated in this system." Harijan, l932 (Translation from a Lower Caste tract circulated among Scheduled Castes and OBCs)

Posted by Karthikeyan at 03:22

Email ThisBlogThis!Share to TwitterShare to FacebookShare to Pinterest
Labels: Scientific Views On Caste